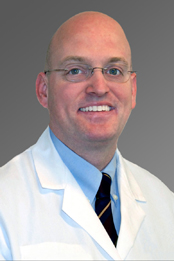 4.7 out of 5 stars - 164 total ratings
About this Provider Patient Reviews

“Fortunately, there’s been a huge leap forward in the overall durability of knee and hip implants.”

A native of Massachusetts, Dr. Brian Burroughs earned a PhD and had a career in engineering before becoming interested in medicine. After earning his doctorate, he became involved in orthopedic research at Mass General, studying hip and knee implants and prostheses, where he also became exposed to the clinical side of orthopedics. “After a while, I came to the realization that orthopedic medicine was a far more interesting career for me, so I made the decision to go to medical school and become an orthopedist.”

As an orthopedic surgeon, Dr. Burroughs specializes in doing knee and hip replacements as well as revision surgery to existing implants. “I think I gravitated to orthopedics and joint replacement because in many ways I still consider myself an engineer,” he explains. “A lot of the patients I see have arthritic hips or knees that have degraded over time. For many patients joint replacement surgery is the best option, but I spend a lot of time educating patients that surgery should be the final choice after they have exhausted other non-surgical treatment.”

Dr. Burroughs believes that knee and hip replacements are expected to go up dramatically in the next decade. “Clearly, people are living longer and don’t want to slow down. Fortunately, there’s been a huge leap forward in the overall durability of knee and hip implants. As a result, they function better and last much longer – and that really benefits patients over time.”

According to Dr. Burroughs, joint replacement has been shown time and time again to improve people’s quality of life. “For many patients, it’s a life-altering event. They have gone down this path of worsening pain and function, and after a joint replacement, it really changes their life for the better. As a doctor, it’s very gratifying to be a part of a transformation like that.”

When he is not busy helping patients, Dr. Burroughs enjoys spending as much time as possible with his wife and three children. He also enjoys doing woodworking projects in his basement workshop.

Star ratings are based on patient responses to 5 questions about the care they have received from their provider. Responses are measured on a scale of 1-5 and the average score is displayed in an easy to view, 5-star format. Learn more about how we measure our patient experience.

Comments marked with an asterisk * serve as a flag to indicate when a patient has left feedback that specifically references a provider's name.

Dr. Burroughs is the absolute best and I would not trust my knees to any other Ortho!

This patient rated the doctor 4.75 out of 5 stars.

I have already recommended him! Nice manner and very informative.

Dr Burroughs was very attentive both times I met with him. Extremely thorough and polite. Making sure to inform me of everything and made sure all my questions were answered. My hip replacement surgery could not have gone better!!! Its only been 4 weeks but I'm so pleased with my progress so far, I haven't been able to walk for 2yrs without being in misery and unaided by 2 canes. I'm going to start outpatient therapy in a few days.

This patient rated the doctor 2.75 out of 5 stars.

Discouraged me from taking surgical remedy. Did not offer any suggestions on how to cope with my pain. Basically told me to live with it.

American Board of Orthopaedic Surgery

Ouch, I Have a Charley Horse!

By Chris Leahy, PA-C Orthopedic and Reconstructive Surgery Chances are, you’ve had a sudden muscle cramp, often referred to as a...

Should I See a Spine Specialist for...

By Dr. Louis Jenis Spine Specialist Reliant Medical Group Orthopedics Most of us have experienced back pain at some point in our lives....

By John Leary, PA-C Reliant Medical Group Orthopedics Many people do not realize that there are steps you can take to minimize your...