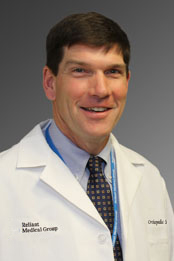 4.8 out of 5 stars - 117 total ratings
About this Provider Patient Reviews

“Patients really have to weigh all the options before them.”

After exploring different aspects of the medical profession, Dr. Kelton Burbank made the decision to devote himself entirely to orthopedic care. He has completed two fellowships in sports medicine – at the Lahey Clinic and New England Baptist Hospital. “It was just something that evolved,” he explains. “I have always had a big interest in sports since I was young so it’s not surprising that I was drawn to treating orthopedic injuries.”

In his practice, Dr. Burbank treats shoulder/sports problems, including rotator cuff injuries, instability, as well as arthritis. “The most common procedure I do is rotator-cuff repairs and those have come a long way. Most surgeons are doing them entirely with the arthroscope now. Instead of a big incision you have a couple of smaller ones, and that makes it much easier on the patient than doing open surgery.”

In addition to his work at Reliant, Dr. Burbank is the orthopedic consultant for the UMass-Amherst men’s hockey team and the Massachusetts representative to the American Orthopaedic Society for Sports Medicine. He is also president of the New England Orthopedic Society. Along with other members of the orthopedic staff at Reliant Medical Group, Dr. Burbank will also be providing care for the Worcester Sharks ice hockey team.

According to Dr. Burbank, treatment for orthopedic injuries in the near future could involve biologic therapies that use the body’s own system to repair or strengthen muscles and tendons. “Ongoing research is showing that biologic treatments for musculoskeletal conditions can lessen pain and improve function and also help prevent more damage to the joints from occurring. So orthopedists may have some great non-surgical options for patients in the future.”

Like many orthopedists, Dr. Burbank is actively involved in sports. He enjoys mountain biking and playing tennis in the warmer months and ice hockey and telemark skiing during the colder weather. Dr. Burbank also enjoys managing his local ice hockey league and watching his twin girls enjoy their favorite sports, including skiing, skating and gymnastics.

Star ratings are based on patient responses to 5 questions about the care they have received from their provider. Responses are measured on a scale of 1-5 and the average score is displayed in an easy to view, 5-star format. Learn more about how we measure our patient experience.

Comments marked with an asterisk * serve as a flag to indicate when a patient has left feedback that specifically references a provider's name.

I like the doctor. Easy to talk with. Explained my concerns well.

Doctor was well prepared for my appointment and made good recommendations for my future care.

Very good service. They attended to me with a lot of respect and kindness.

The Surgery Center
Get Directions (opens in new window)

Ouch, I Have a Charley Horse!

By Chris Leahy, PA-C Orthopedic and Reconstructive Surgery Chances are, you’ve had a sudden muscle cramp, often referred to as a...

Should I See a Spine Specialist for...

By Dr. Louis Jenis Spine Specialist Reliant Medical Group Orthopedics Most of us have experienced back pain at some point in our lives....

By John Leary, PA-C Reliant Medical Group Orthopedics Many people do not realize that there are steps you can take to minimize your...