Vaping and E-Cigarettes – Here’s What You Need to Know 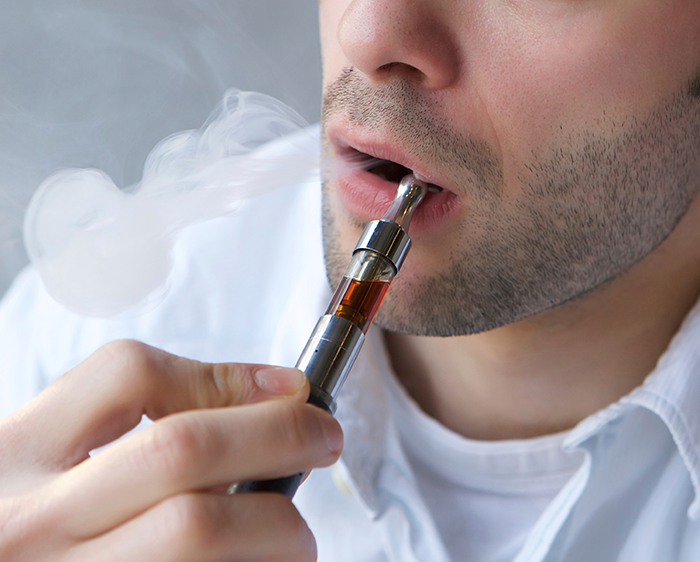 Chances are, you’ve heard about vaping (inhaling an e-cigarette). The practice has become especially popular recently with young people and teens.

Although e-cigarettes were introduced less than a decade ago, according to some studies an estimated 10 percent of American adults and 13 percent of high school students now use them. In fact, in 2014, more teenagers used e-cigarettes than regular cigarettes and the practice continues to grow each year. Not surprisingly, the use of e-cigarettes has become increasingly controversial. Many health authorities worry that young people who use them will go on to become regular cigarette smokers when they get older.

Another big concern is the health effects of vaping. In addition to the addictive dangers of nicotine, the flavorings used in e-cigarettes can also be dangerous. Some of the chemicals, although proven safe for eating, are known to be irritants to the lungs when vaporized and inhaled. In fact, diacetyl, a butter-flavored chemical used in some vaping products has been linked to a life-threatening obstructive lung disease. The flavors, with names like cotton candy, vanilla bean and pineapple punch, are used to make the nicotine more appetizing.

Recent studies have shown that the chemical compounds in e-cigarettes can cause many of the same breathing problems as smoking. According to a new study published in JAMA Pediatrics, adolescents who use electronic cigarettes are 30% more likely to have respiratory problems. The study also found that there was an even greater risk for e-cigarette users who had never smoked traditional cigarettes. These students were twice as likely to have respiratory problems as the students who didn’t use the devices. It’s important to note that despite the fact that e-cigarettes are widely marketed, there have been no rigorous scientific studies showing they are safe for use.

Flavor Packets Can be a Household Hazard

The liquid nicotine contained in the e-cigarette flavor packets can be very dangerous. It is believed that half a teaspoon could be enough to kill a child. Even skin contact with the concentrated liquid nicotine is enough to cause symptoms of poisoning, such as dizziness, elevated blood pressure and seizures.

Although e-cigarettes may be growing in popularity, given what we are learning about their dangers, they really need to be seen as a potential hazard to people’s health – so we strongly discourage their use.

What are e-cigarettes exactly?

E-cigarettes are electronic inhalers that use a liquid cartridge which is heated by a rechargeable battery. An LED at the end of the device lights up when a user takes a puff. The liquid in the cartridge contains nicotine along with flavorings.

Basically, vaping is inhaling vapor through an e-cigarette. When a user draws on the device, the battery heats the liquid which is atomized into vapor.

How is vaping different from smoking?

Vaping is inhaling vapor, while cigarette smoking is inhaling smoke. E-cigarettes have fewer chemicals than traditional cigarettes, but do contain propylene glycol, volatile organic compounds and other toxicants along with the flavors.

Are there long-term effects associates with vaping?

Since e-cigarettes are relatively new, the long-term effects have not been sufficiently studied.